Genuine Qi Gong not only helps patients overcome cancer, it can vastly improve the patient’s perspective on life.

Genuine Qi Gong not only helps patients overcome cancer, it can vastly improve the patient’s perspective on life. 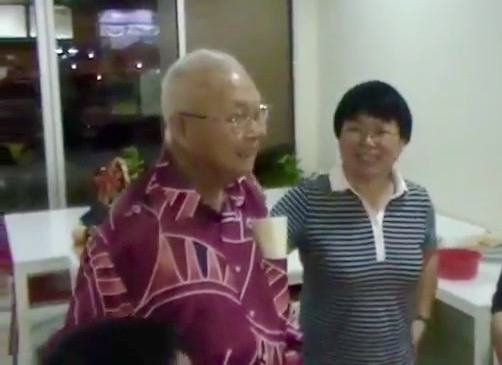 Uncle Ang (not his real name), was diagnosed with prostate cancer. He underwent surgery to remove his testicle, hoping that would stop the prostate cancer from spreading further and metastasizing.

At the age of 78 “Uncle Ang” had been diagnosed with prostate cancer stage 3-4, he was feeling extremely weak and was unable to eat or sleep, family members had prepared for the worst.

Above is a photograph of the patient after recovery at the HHCC in 2012.

The first time I met Uncle Ang he was unable to walk and could not sit up straight, he informed me he could not eat more than a spoonful of plain rice a day. Every night he would be unable to sleep and he had only been able to go to the toilet once a week.

Fortunately, one of Uncle Ang’s sons is a Western trained medical doctor and he knew that his father would not be able to withstand the Chemotherapy treatment; therefore the family was not in a position to even consider Chemotherapy as viable option. Furthermore as the operation to remove Uncle Ang’s testicle had left him extremely weak, he had almost given up hope of a recovery and his family were so convince of his impending demise that they even bought a plot in the cemetery, preparing for the worst.

Treating Uncle Ang at the HHCC proved to be a real challenge at the very early stages, this was partly due to his physically weakened condition and a further complication was that his mental confusion was making it very difficult for him to follow the necessary instructions. However I remained fully confident that I could help him to overcome his sickness. I started the treatment by opening his vital energy points and transmitting Qi to him. Using a step by step approach, I gradually introduced the patient to the essential Qi Gong exercises that were necessary for him to regain his energy. Although in the early stages, he was unable to fully perform the exercises, part of my role as a healer is for me to encourage the patient, rewarding their efforts and their progress with positive feedback and making the healing sessions less of a chore and more about enjoying their journey to good health.

Gratifyingly, as the treatment progressed the patient gradually regained strength and after undergoing 3 weeks of Qi Gong healing, Uncle Ang was able walk freely and without pain. He also informed me that his appetite had fully returned and that he could now eat 3 bowls of rice a day.

Uncle Ang continued with his Qi Gong healing under the care of the HHCC and after 2 months his PSA marker reading had dropped from more than a thousand counts, to a reading of just 8.  A healthy person should have a PSA marker reading of 4 or below. After a total of 6 months Qi Gong healing Uncle Ang’s PSA marker reading had dropped to 2.4 and it has been maintained around that level for many years. At the time of his arrival at the HHCC Uncle Ang had been a diabetic patient for more than 20 years.  After undergoing Qi Gong healing not only had the patient overcome his cancer, the treatment had also had a very positive impact on his general health, in that the problems associated with his diabetes were also proving to be more manageable. In all his 79 years he had never dared to fly in a plane. Now since his recovery he has flown to Australia for a holiday and has enjoyed the experience of visiting his relatives abroad.

Genuine Qi Gong healing is remarkable, as not only can it be used to save lives, but it can also bring back a new zest and a more positive outlook to life in general. This in turn will lead to good and sustainable healthy life style.